In 2011 the applicant, Tecnica Group SpA, filed an application for the following three-dimensional (3D) trademark in Classes 18, 20 and 25: 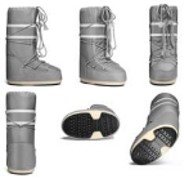 The trademark was registered without difficulties. In 2014 the intervener, Zeitneu GmbH, filed an action before the Tribunal in Venice, which considered that there was a risk of confusion between the contested sign and the footwear collections manufactured by the intervener.

In 2017 the intervener filed a cancellation action before the EUIPO against all goods covered by the 3D trademark. The action was partially upheld in relation to the goods in Class 25. Following the confirmation of the decision by the First Board of Appeal of the EUIPO, the applicant appealed to the General Court.

In its appeal, the applicant replied on five pleas related to procedural matters. However, the heart of the matter concerned whether the reputation of a trademark necessarily confers distinctive character to this mark.

Among other things, the applicant argued that its trademark had a strong distinctive character, or otherwise that it had acquired distinctive character through use. The court recalled that it is for the owner of the trademark in respect of which a declaration of invalidity is sought to invoke acquired distinctiveness, and to provide sufficient evidence to prove this point. In the present matter, however, the applicant had not provided evidence in that regard: it had only invoked the fact that its trademark benefitted from a high degree of reputation.

Further, the court noted that the requirements to prove distinctiveness and those to prove reputation are different. While it is necessary to provide evidence of reputation in a substantial part of the European Union, in order to establish acquired distinctiveness through use, at least a significant portion of the relevant public must identify the goods or services as originating from a particular undertaking. Consequently, and contrary to what the applicant argued, even though the evidence submitted allowed to prove reputation, it was not sufficient to demonstrate distinctiveness acquired through use.

Further, the applicant contested the definition of the ‘relevant consumers’ and their level of attention. According to the applicant, the level of attention should be considered as high, rather than average, as the relevant consumer is one who regularly takes part in skiing and hiking activities and is therefore attentive to the details of the products. However, the court considered that the goods in question are common, with a limited life and the price of which is not exorbitant. Consequently, the relevant public consisted of the general public in all member states, with an average degree of attention.

In addition, the court recalled that, in order to demonstrate the distinctiveness of a 3D trademark, it is necessary to show that the mark departs to a significant degree from similar products on the market. This is due to the fact that a 3D trademark consists of the appearance of the product itself. It is therefore crucial that the mark allows consumers to distinguish the commercial origin of the product from that of others, so that the trademark can fulfill its essential function of indicating origin. In the present case, as the mark corresponded to a product shape that was common on the market, it did not have distinctive character.

The court thus confirmed the partial cancellation of the trademark for goods in Class 25.

Tecnica’s perseverance in seeking to protect its rights should nevertheless be highlighted. Even though trademark protection appears difficult, it is not excluded that it may benefit from protection via other methods, such as copyright, before national jurisdictions.

Finally, this decision should remind applicants of signs that are potentially generic that appropriate protection strategies must be put in place from the beginning. While protection via a 3D trademark may be favourable due to the length of protection that it offers, the risk of future actions based on an absence of distinctive character cannot be excluded. Therefore, parallel protection through other means (eg, designs) is highly recommended.